You are here: home in the shadow of my father

In the Shadow of my Father 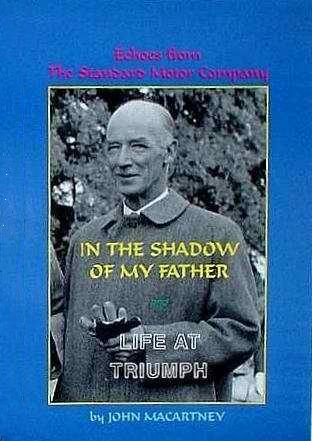 "A perfect bound paperback running to 212 pages with many previously unseen photographs. Now in its third re-print, "In the Shadow of my Father" is a Father and son story about The Standard Motor Company in Coventry - and Standard-Triumph as it later became known.

Charles Macartney and his son John, both worked for the same company at different times. For Charles, it was from 1921 - 1961 and for John from 1966 until 1972 when he moved into the higher echelons of British Leyland management.
Unlike many automotive history books, this one is different and tells stories of those who made the cars or were responsible for selling and servicing them. The cars are therefore a backdrop. A light hearted and often slightly irreverent view of this car manufacturer from the inside track. Several have said the book opens an Aladdin's Cave of stories that no self-respecting PR Manager would ever admit to confirming.
Since this book first appeared in 1998 to celebrate Charles Macartney's Centenary, it has attracted many favorable reviews from Standard and Triumph enthusiasts around the world and is said by many to be a "must have" for a marque dedicated bookshelf.
The author, is now well advanced into writing this book's sequel that features other untold stories of a similar genre and this will be available in about a year's time under the title of "FULL CIRCLE."
For reviews of this book, please go here
Click on the Cover to see an enlargement
Price will adjust when you select your delivery area
This item is available to non-members.  Your order will be accepted without a valid membership number at the checkout
Earn 0 reward points with this purchase
Add This Product To Your Wishlist